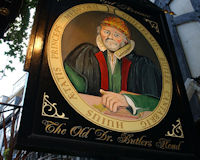 The last of the Dr Butler's Head taverns.

Description: The Old Doctor Butler's Head dates back to 1610 - with the present building dating back to just after the Great Fire of London in 1666.

Physician Dr. William Butler (15351618) was a 17th century self-proclaimed 'specialist' in nervous disorders and his miracle cures. He developed a reputation for being an eccentric, a drunkard, and the great physician of all time (he claimed).

When an unresponsive clergyman was brought to his attention, he sent for a cow, asked for it to be slaughtered and innards removed. He then placed the comatose clergyman inside the 'cowes warm belly' and miraculously the clergyman regained his senses and survived.

Another of his cures would see the client take consultation on London Bridge, and then dropped through a trapdoor into the torrent below.

As a cure for epilepsy, he would fire a brace of pistols near his unsuspecting patient, to scare the condition out of them.

In cases of the plague, he'd plunge the poor souls into cold water, an expensive treatment in spa hotels today!

So highly was he considered, that despite his lack of qualifications he was appointed court physician to King James I.

At a similar time, he developed a medicinal ale for gastric ailments, which was available only from taverns which displayed Dr. Butler's head on their signs. This led to him acquiring a number of ale houses in the capital - of which this pub, the Old Dr. Butler's Head is the last one standing.

Dr Butler's purging ale became rather popular but is not on tap today sadly.

The pub is a Grade II listed building.