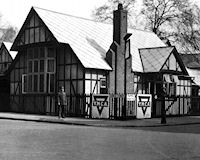 The refuge for New Zealand troops returning from war.

Description: The London School of Hygiene & Tropical Medicine (informally the LSHTM) is a prestigious public research university, opened here in 1929.

The school was originally founded in 1899 by Sir Patrick Manson as the London School of Tropical Medicine, and was based at the Albert Dock Seamen's Hospital in the London Docklands.

However, this site is more famous as the home to the Shakespeare Hut, refuge for recuperating soldiers on their return from the horrors of the frontline in 1916.

It was close to the anniversary of Shakespeares death and plans for a theatre here were abandoned when the war started. The YMCA were tasked with erecting thousands of prefabricated buildings in the UK and abroad with troops. This was the largest structure they built, and they went to town on it. The Mock-tudor style building housed a billiard room, a mini theatre, barbers shop, and more.

It housed over 100,000 troops mostly from New Zealand, with Queen Mary visiting in 1917 to help serve tea!

Time to Honour and Respect», 1.5km