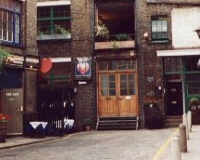 The location of the urban legend of the Bleeding Heart murder.

Description: Bleeding Heart Yard is a cobbled courtyard and is supposedly named after Lady Hatton's murder here. Although this is certain an urban myth.

Lady Elizabeth Hatton was the toast of 17th Century London society. The widowed daughter-in-law of the famous merchant Sir Christopher Hatton (one-time consort of Queen Elizabeth 1), Lady Elizabeth was young, beautiful and very wealthy. Her suitors were many and varied, and included a leading London Bishop and a prominent European Ambassador. Invitations to her soirees in Hatton Garden were much sought after.

Her Annual Winter Ball, on January 26, 1662, was one of the highlights of the London social season. Halfway through the evening's festivities, the doors to Lady Hatton's grand ballroom were flung open. In strode a swarthy gentleman, slightly hunched of shoulder, with a clawed right hand. He took her by the hand, danced her once around the room and out through the double doors into the garden. A buzz of gossip arose. Would Lady Elizabeth and the European Ambassador (for it was he) kiss and make up, or would she return alone? Neither was to be. The next morning her body was found in the cobblestone courtyard torn limb from limb, with her heart still pumping blood onto the cobblestones. And from thenceforth the yard was to be known as The Bleeding Heart Yard.

Charles Dickens knew Bleeding Heart well. In Little Dorritt, the Plornish family lived in a house in Bleeding Heart Yard. The more practical of the Yards inmates abided by the tradition of the murder.

But he went on to document another Bleeding Heart story: The gentler and more imaginative inhabitants, including the whole of the tender sex, were loyal to the legend of a young lady imprisoned in her own chamber by a cruel father for remaining true to her own true lover but it was objected to by the murderous party that this was the invention of a spinster and romantic, still lodging in the Yard.