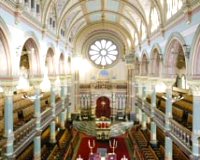 The oldest synagogue in England; the Bevis Marks Synagogue.

Description: The Bevis Marks Synagogue here was opened in 1701 to serve the Spanish & Portuguese Jewsâ Congregation. Today it is one of the best-preserved houses of worship of its period still in regular use.

Jews were permitted to return to Britain in 1657 under Oliver Cromwell. Some of the most eminent figures of Anglo-Jewry sat at prayer in the Synagogue such as Sir Moses Montefiore. Disraeli was born into the Congregation and there are links to the Rothschilds. Today it is regarded as the most distinguished British Synagogue.

Even though recently restored, the interior has barely changed since it was built. It is in the style of many Nonconformist chapels of the period. The influence of Sir Christopher wren is also evident. The Synagogue has one of the finest collections of Cromwellian and Queen Anne furniture in the country and the magnificent brass candelabra with glowing candlelight.

Miracle at the Vishwa Temple», 12.km

The Congregation of Jacob», 1.0km