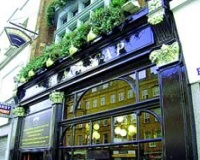 1751, a witch was supposed to brew, quite literally, lethal ale.

Description: The Black Cap has been licensed since 1751, when a witch was supposed to brew, quite literally, lethally potent ale. Her parents were hanged for killing a girl by black magic, and people mysteriously disappeared and died when in her company.

This pub was also the place where local murderer Thomas MacDowell met his victim Andreas Hinz in July 2002.