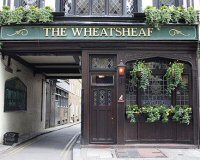 This is where Dylan Thomas fell in love at first sight.

Description: Here at the Wheatsheaf poet Dylan Thomas met and fell in love at first sight with Caitlin Macnamara in the first week of April 1936.

According to Caitlin, they spent the next five or six days at the nearby Eiffel Tower Hotel, leaving the bill to be picked up by her occasional lover, Augustus John.

Also at The Wheatsheaf Thomas met many of the leading figures of the British Surrealist movement. Plus George Orwell drank here.