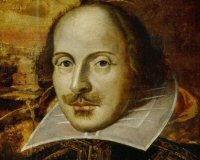 This is where William Shakespeare lodged in 1612.

Description: This is where William Shakespeare was lodging with Christopher and Marie Mountjoy in 1612, who made 'tires', the elaborate headdresses of gold and silver wire and pearls and spangles that sat on Elizabethan ladies' coifs.

The Mountjoys were French Protestant immigrants and doing well (they supplied Queen Anne of Denmark with tires to the value of Â£59 a lot in those days) but Christopher was mean and disagreeable and refused to pay the agreed dowry for their only child, Mary, when she married Stephen Belott, their honest apprentice. Stephen sued in the Court of Requests, and eight years after the marriage the former lodger, by now 'William Shakespeare of Stratford upon Avon in the county of Warwickshire, gent', was called to give evidence. It is, as author of a book called The Lodger, Charles Nicholl says is the only time we hear Shakespeareâs own words reported.

But Shakespeare was not just a witness to all the furious squabbles that led up to the marriage. He also, at Mrs Mountjoyâs pleading, persuaded Stephen to marry Mary and clinched the match â 'they were made sure by Mr Shakespeare'.