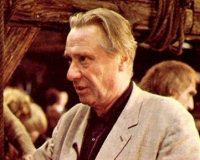 This is where legendary film director Carol Reed lived.

Description: Home of The Third Man director Carol Reed.
Reed directed such British cinema classics as The Third Man, Odd Man Out, Fallen Idol, Night Train to Munich, A Kid For Two Farthings, Our Man in Havana, The Way Ahead and Oliver for which he won an academy award. Reed lived here from the early 50's until his death with his wife Penelope Dudley Ward and was the firstfilm director Knighted for his work.