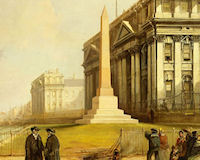 This is the obelisk to the French Arctic Explorer.

Description: This obelisk designed by Phillip Hardwick was erected in 1855 in memorial to the French Arctic Explorer and Lieutenant of the French Navy, Bellot who perished under the ice. It happened in the Wellington Channel in August 1853 while carrying despatches from Beechey Island to Sir Edward Belcher's squadron, then searching for the lost 1845 Arctic expedition of Sir John Franklin.


The intrepid explorer has a street named after him nearby, and his expeditions brought him much recognition that 2000 was raised after his death (500 for this obelisk, and 1500 for his sisters).

There is even a crater on the moon named after him.


The Obelisk is pictured beautifully in the picture by George Chambers, note that one of the ships flies the French flag, which is undoubtedly a reference to Bellot. 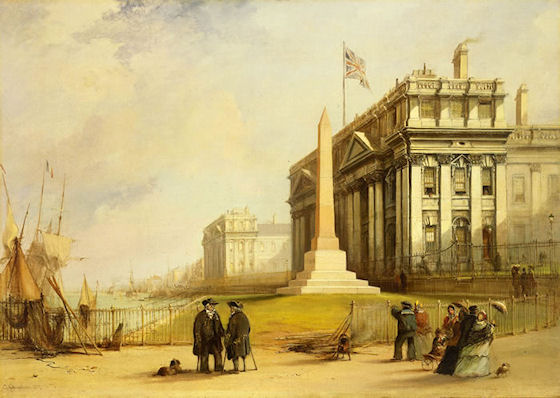