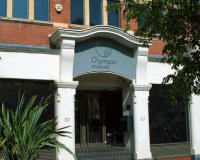 The studios where Jimi Hendrix recorded Are You Experienced?

Description: The Olympic Studios have been host to some of the greatest recording sessions in history, including albums from The Rolling Stones, Jimi Hendrix and Led Zeppelin.

The building that currently houses the studio was originally constructed in 1906 as a music hall for the Barnes Repertory Company. Various talks, meetings and theatrical performances were staged in the building over the years until the mid 50s when Guild TV purchased the property and converted it to a cinema and entertainment venue. When the lease expired in the sixties it was bought by Cliff Adams and Keith Grant who converted the building into London's quintessential rock studio in 1966.

The Stones recorded Between The Buttons here, Led Zeppelin recorded I, The Beatles recorded All You Need is Love, Jimi Hendrix recorded Are You Experienced?, Eric Clapton and The Yardbirds recorded their first 3 singles here, Queen recorded The Miracle, Roxy Music Mamouna, Duran Duran Liberty, and Robert Plant Manic Nirvana.

4» The Small Faces recorded their first album Immediate here, check out the experimental sounds in the background! (Jeff Houston)
Posted by Jeff Houston on 2011-03-01
3» Slade used the Olympic Studios to record several of their albums:- Play It Loud, Slayed, and Old, New, Borrowed and Blue (noizefeeler)
Posted by noizefeeler on 2011-02-08
2» I used to live in Barnes buncked off school in the 60s great life then......bring back the sex drugs & rock and roll!!! peter smith (Anonymous)
Posted by Anonymous on 2010-10-12
1» Hello, I used to clean Olympic Studios early mornings back in 1966. It was a very intersting place to work as I was well into the music of the 60s and really felt the atmosphere. I remember cleaning up after the recording of The Troggs Wild Thing. I was quite surprised to see on a recent tv program that the recording only took 15 minutes. The only puzzling thing was I thought the studio was located off Baker Street. I entered from the back and on the ground floor was reception, the toilets and the main recording studio. On the next floor was the control room with a window overlooking the recording area. Then on the top floor looked like the cutting area with all sorts of pieces of tape over the floor. Can you help with my memory here? All good wishes - Jean (jean goldsmith)
Posted by jean goldsmith on 2008-09-13