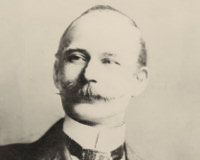 The murder of Aliza Barrow by arsenic-laden fly paper.

Seddon, the area supervisor for an insurance company, made some quick calculations of Miss Barrows wealth (actually over 4000) and advised her that in return for a small annuity and the remission of her rent, he would agree to manage her business accounts.

She duly signed over to him her properties in Camden Town and early in 1911, he increased the annuity in exchange for her India Stock.

That summer, Miss Barrow fell violently ill with constant diarrhoea and vomiting. The top floor of the house stank so badly that the attendant doctor advised the Mr and Mrs Seddons to hang sheets soaked in carbolic around the sick room. They went one step further.

Seddon instructed his daughter Margaret to purchase from the chemists a box of fly paper, which in those days was coated with arsenic. These they proceeded to hang around the recumbent Eliza Barrow, suspended over saucers of water to aid evaporation. Ten days later, after several disturbed nights, Miss Barrow died.

Seddon arranged for her burial in the cheapest public grave possible, accepting a commission of 12 shillings from the undertaker for the business, but he hadn't reckoned on the fact that Miss Barrow's burial would be published in the register of the local newspaper, or that a cousin of hers Frank Vonderahes, would read it.

As the Barrow family vault lay in Highgate Cemetery and no application had been made to bury Miss Barrow there, Vonderahes contacted the police. An exhumation was ordered and Eliza's body was found to contain fatal amounts of arsenic.

After trial Seddon concluded his speech with 'I declare before the great Architect of the Universe I am not guilty' and he raised his arm and gave a Masonic sign.

Mr Justice Bucknill then pronounced the sentence of death.

No reprieve came and Seddon was hanged at Pentonville Prison, just a short walk from his home, on 18 April 1912 with over 7,000 people assembled outside. The crowd would undoubtedly have been larger, were it not for the fact that news of the sinking of the Titanic three days earlier.