The Assassination of Mr Thynne 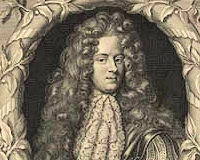 The location of the murder of Thomas Thynne

Description: As any visitor to Westminster Abbey passes through the south aisle of the choir, he can scarcely fail to notice sculptured upon one of the most prominent monuments a frightful scene of assassination.

The victim of this murder was Thomas Thynne, who had a short time before succeeded in carrying off the youthful widow of Lord Ogle. The handsome Count Koningsmark (pictured), who had been rejected by the lady, was tempted by disappointed passion to plot, if not to perpetrate, this barbarous revenge upon his rival.

Thomas Thynne, of Longleat, in Wiltshire, was descended from an ancient family, and from his large income was called 'Tom of Ten Thousand.' He had been a friend of the Duke of York, afterwards James II; but having quarrelled with his royal highness,

Thynne had latterly attached himself with great zeal to the Whig or Opposition party, and had become an intimate associate of their head, the Duke of Monmouth.

At Longleat, where he lived in a style of magnificence, Thynne was often visited by Monmouth.

It was on the night of Sunday, the 12th of February 1681-2, that the west end of London was startled by the news that Thynne had been shot right here while passing in his coach along Pall Mall.

King Charles, sitting at Whitehall, might almost have heard the report of the assassin's musketoon; and so might Dryden, sitting in his favourite front room, on the ground-floor of his house on the south side of Gerrard-street, also hardly more than a couple of furlongs distant.

The murderers escaped. Thynne survived his mortal wound only a few hours, during which the Duke of Monmouth sat by the bedside of his dying friend.

On the 28th Feb 1681 Charles George Borosky (Boratzi), Christopher Vratz, John Stern and Charles John Count Koningsmarck were up at the Old Bailey to be tried for murder. The evidence proved that Borosky shot Thynne and Vrazt and Stern assisted him. The count was acquitted to much public outcry while his men were hanged in Pall Mall, with Borosky gibbetted at Mile End. It was widely suspected that the jury were paid handsomely to acquit the Count.

The count left the country immediately for the continent back and to his estates in Germany.

Thynne's murder excited a lot of attention including that of John Evelyn, who went to view the embalmed body of one of the murderers it being one of the first, which was embaulmed by a particular art invented by one Will: Russell a Coffin Maker.