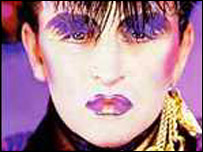 Description: The 'Blitz Club' in London's Covent Garden where the 'New Romantics' came of age.

The club first opened its doors in 1979 at the height of another recession and the flamboyant Blitz scene offered an escape from the hard economic reality that young Londoners were facing.

Walking into the Blitz was like stepping out of time, you never knew what period it was set in. It was a total mish-mash of styles, full of blurred genders and make-up for girls and boys.

The Blitz crowd were christened the 'New Romantics' because of their nostalgia for the future.

The Blitz was a seedbed for creative talent, full of musicians, designers, photographers and stylists. John Galliano first flaunted his ideas there, Spandau Ballet played their early gigs and a young Boy George took the coats.

A new sound emerged from the club - the synthesizer-based electropop pioneered by 'Midge Ure' in his bands Visage and Ultravox. The success of the Blitz bands brought wealth and fame, but the 'extreme hedonism' of the 'New Romantic' movement led many into very dark places.