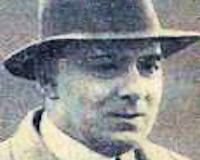 The designer of the disastrous R101 airship lived here.

Description: Lt. Colonel Vincent Crane Richmond OBE (1893-1930) grew up here, and attended the nearby Selwyn Avenue School. He grew up to be an inventive engineer and joined the navy where, after inventing a technique for doping linen before stretching it over the airframe, he earnt the nickname Dope.

He joined the Royal Airship Works in 1924 as Officer in Charge of Design and Research. He was responsible for the design of the R101, and enjoyed a rivalry with Neville Shute Norway who worked on the design for the rival Vickers R100 design.

After a number of trial flights the R101 set out on its maiden voyage from England to India. It made it across the channel but touched the ground near Beauvais, France and caught fire.

Vincent Richmond was one of 48 who perished on that fateful day on 5th October 1930.

A few years later two roads nearby; Richmond Avenue and Richmond Crescent, were named in his honour.

The Aeronaut of Holloway», 6.7km