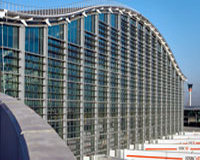 This is where the latest addition to Heathrow's hub is.

Description: Architect Richard Rogers was selected to design the controversial terminal in 1989 and BAA formally announced its proposal for T5 in May 1992, then on 20 November 2001, planning permission for the building of a fifth passenger terminal at Heathrow was granted.

The Queen officially opened Terminal 5 in a ceremony on the 14th March 2008.

The Aeronaut of Holloway», 28.km