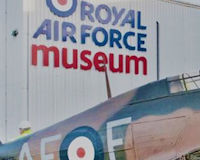 Historic Royal Air Force Museum opened by The Queen in 1972.

Description: The RAF Museum is located here at the former Hendon Aerodrome, sprawled across five buildings and hangars showing the history of aviation and the Royal Air Force. Its partner site is at Royal Air Force Museum Cosford in Shropshire.

This site was one of the first civilian airfields, acquired by Claude Grahame-White in 1911. He made a historic flight here in 1910, the first night flight - from here to Manchester.

In 1914, the aerodrome was requisitioned for Home Defence during the First World War and became a Royal Naval Air Station, training new pilots in the flying schools here. From 1927 to 1939 Hendon housed No. 601 Squadron, nicknamed the 'Millionaires' Squadron' due to the wealth and upper social class of its volunteers.

In 1939, the outbreak of war saw Hendon once again become an operational RAF station, home to No. 24 Transport and Communications Squadron. RAF Hendon also served briefly as a fighter station during the Battle of Britain.

The last flight to Hendon by a fixed-wing aircraft took place on 19 June 1968, when the last operational Blackburn Beverley was delivered to the Museum prior to its royal opening on 15th November 1972 by Queen Elizabeth II.

Soon afterwards, the runways were removed to make way for the Grahame Park Housing Estate.

Today you can visit and discover the iconic Spitfire Mk1 and mighty Hurricane from the Battle of Britain, the Lancaster S for Sugar and a Chinook among many exhibits.