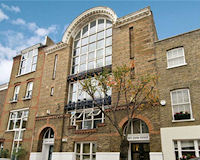 The influential art school that James Dyson studied at.

Description: The Byam Shaw School of Art was an independent art school in that specialised in fine art and offered foundation and degree level courses.

It was founded in 1910 by John Liston Byam Shaw and Rex Vicat Cole and in 2003 it was absorbed by Central Saint Martins College of Arts and Design.

Birthplace of the Pre-Raphaelite», 2.9km