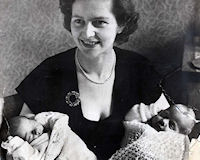 Description: After renting in Pimlico, this 6th floor flat became the marital home of Margaret and Denis Thatcher from New Year in 1952 when the future prime minister was 28 and had returned from honeymoon. She was working as a lawyer while also looking after her twins Carol and Mark, then less than a year old.

Thatcher described the flat in her memoirs as being light... with a fine view of London. It is thought she decided to pursue a political career at this point.

Thatcher wallpapered and redecorated the flat herself and became for the first time a formidable hostess, according to her biographer John Campbell.