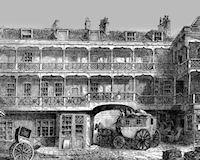 This is one of the inns where Shakespeare's men played.

Description: This is where the Bel Savage was the earliest of the four known Shakespeare inn playhouses although specific dates are scarce. It was known to date back at least to 1420. Savage perhaps referring to William Savage who lived nearby in Fleet Street.

In 1584 four inns are recorded as being licensed by the City for dramatic performances. This one, the Bull Inn, the Bell Inn and the Cross Keys Inn.

The Queens Men performed at all these inns during the 1580's starring the famous comic actor Richard Tarlton, along with several other unidentified companies. Here balconies surrounded the inner court, which served as the upper and lower circles. The rooms of the Inn essentially became private boxes and the yard itself was the pit. The showman William Bankes and his trick horse Marocco performed here.

In 1594 the city authorities ordered a ban on playing in the City of London. Bear-baiting also took place in the latter half of the 16th century.

In 1616, Pocahontas and her staff, who had come over from Virginia, United States, stayed here at the Bell Savage.

In the Great Fire of London in 1666 the Inn was badly damaged, but rebuilt a few years later.

In 1684, the inn was advertising a Rhynoceros, lately brought from the East Indies which could be seen by the public for a small fee the first rhinoceros to be exhibited in England.

Sadly the Inn was finally demolished in 1873 to make way for a railway viaduct.

The First ever London Theatre», 1.2km