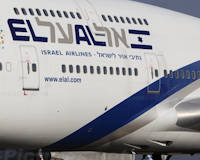 This is where a murder of an Israeli air stewardess took place.

Description: This is where, on August 20th 1978, a bus carrying Israeli staff of airline El Al on a stopover in London, pulled up to their hotel (then the Europa Hotel) and were immediately attacked by two gunmen.

They opened fire with sub-machine guns and threw hand grenades, one blowing himself up in the process. Pedestrians nearby were also shot. One air stewardess (Irit Gidron, from Haifa) and 9 were taken to hospital.

The Popular Front for the Liberation of Palestine (PFLP) later said it had carried out the London attack, and Israel launched (condemned by the US and UK) retaliatory attacks on Palestinian targets.

The coach was riddled with bullet holes as were nearby buildings and the other attacker was arrested.

Today the hotel is called the London Marriott Hotel Grosvenor Square with it's entrance much unchanged just around the corner on Duke Street.