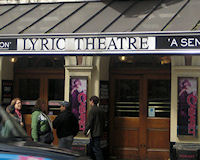 Description: The Lyric Theatre was designed by architect CJ Phipps for the producer Henry Leslie using grand profits from the Alfred Cellier and BC Stephenson hit, Dorothy. He moved this show here from the Prince of Wales Theatre on the 17th December 1888.

The theatre is one of the few to still use water to hydraulically operate its iron curtain.

Rising Damp legend Leonard Rossiter died here from hypertrophic cardiomyopathy in 1984 while waiting to go onstage, where he was performing in Joe Orton's play Loot.

The theatre was Grade II listed by English Heritage in September 1960.