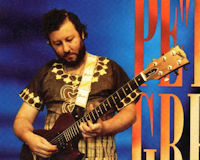 Description: This is the former family home of Fleetwood Mac guitarist Peter Green where he grew up as a child. The first floor flat saw the early development of a legend of music.

As a youngster he started playing guitar at the age of 11, and then aged just 15 he played bass guitar in a band called Bobby Dennis and the Dominoes, performing pop covers and rock 'n roll standards, including Shadows covers - his idol being Hank Marvin.

Then, in 1966 Green played lead guitar in Peter Bardens' band Peter B's Looners, where he met drummer Mick Fleetwood. After three months, Green was asked to fill in for Eric Clapton in John Mayall & the Bluesbreakers for three concerts, and was subsequently asked to join the band for good.