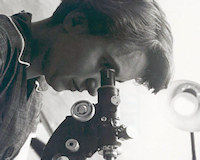 She received recognition for her work on viruses and materials during her lifetime, but it is only posthumously that she was instrumental in the work that Francis Crick and James Watson achieved on the DNA nobel prize research (that she wasnt credit with at the time).

In 1950 she began to study systematic X-rays of DNA fibres, producing crucial information used by Crick and Watson in building their DNA model.