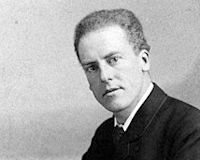 Pearson was also an early proponent of eugenics the selective breeding of people to 'improve' a population now making him extremely controversial.

He was elected a Fellow of the Royal Society in 1896 for his contributions to statistics and evolutionary theory.

In 1911 he founded the world's first university statistics department at University College London.

Pearson moved here with his wife and young daughter Sigrid in 1892, and it was the birthplace of Pearson's son, Egon (18951980), also an eminent statistician. He subsequently lived here until his death.

Egon wrote in the 1936 biography of his father Pearson had moved from the Temple to Christchurch Cottage, Hampstead, some little time before his marriage [to Maria Sharpe in 1890]. This small but attractive house stands by the church of that name not far from the Heath. With an increasing family, the Pearsons moved to a larger house nearby, No. 7, Well Road in 1892.

In 2020, following an inquiry into UCLs historical links with the eugenics movement, the names of Galton and Pearson were removed from two lecture theatres and a building at the university.