The atom bomb was born here 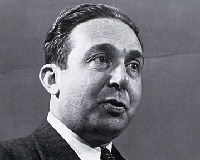 Description: Hungarian physicist Leo Szilard made a nuclear breakthrough here. On the morning of 12th September 1933 Leo read a speech by Ernest Rutherford about splitting nucleii, and was deep in thought on the subject.

...anyone who looked for a source of power in the transformation of the atom was talking moonshine.

He was standing waiting for the lights to change to cross the road where Southampton Row becomes Russell Square. When the lights changed to green and Leo moved off the pavement Leo thought 'What would happen if neutrons were smashed into the nuclei of atoms in a way that released two neutrons from the second atom?'.

Bang, the atom bomb was born.