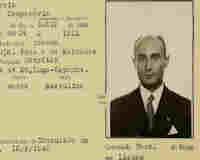 The house that help win the Second World War.

Description: This standard suburban home surprisingly played a key role in defeating the Nazi's in the second world war.

A former Spanish chicken farmer Juan Puyol Garcia lived here with the Germans believing him to be their top spy in Britain. In fact, he worked for MI5 and sent a stream of more than 500 false radio messages to Germany from this house.

However, Puyol, who had also fought on both sides of the Spanish civil war, had a problem.

His wife, who was homesick, threatened to expose his situation to Germany and the deception nearly came crashing down.

Puyol Garcia (codename Garbo) had a part to play in the D-Day landings, diverting German attention away from Normany to Calais in dozens of messages.

Time to Honour and Respect», 6.3km