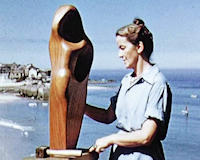 Description: Celebrity sculptor married couple Barbara Hepworth and John Skeaping lived here from 1927, during the early stages of both their careers. They were leased the basement flat by the writer Leo Walmsley.

Hepworth broke new ground with her abstract sculptural forms and became a pioneering figure in British modernism, while Skeaping ultimately moved away from the avant-garde to become a renowned Animalier a specialist in the realistic representation of animals.

In the rear of the building Skeaping built an aviary that ran the length of its rear wall which housed the birds we had brought back from Italy a colourful collection of budgerigars, weavers, waxbills and Nyasaland lovebirds Life was delightful the only commodity we lacked was money.

For both, the blue plaque erected here in 2020 represents a significant period in their artistic development.

Emblem of the Cockney World», 4.0km