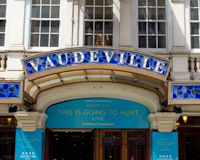 The Vaudeville Theatre and scene of the Terris Prince argument.

Description: The Vaudeville Theatre was opened in 1870 after the owner of the original houses here closed the struggling billiard hall in the extension at the back and, no surprise here, reopened with a cramped theatre with vaudeville, burlesque, and musical revues.

The day after the Theatre opened, magazine review The ERA, wrote 'This elegant little theatre has been erected upon the site occupied by Nos. 403 and 404 Strand, and the premises of the defunct Bentinck Club in the rear. It extends nearly as far as Maiden Lane towards the north and to Lumley Court towards the east.'

Great Shakespearean actor Henry Irving, had his breakthrough here as Digby Grant in James Albery's Two Roses in 1870 and ran for an extraordinary 300 nights.

The next record breaker was the comedy Our Boys by HJ Byron, which started its run at the Vaudeville in 1875 and managed more than 500 consecutive performances.

In 1882, Thomas Thorne took over the lease and he demolished the old houses in front and theatre to reopen with a new foyer and more spacious seating on the 13th January 1891 with a performance of Jerome K. Jerome's comedy, Woodbarrow Farm.

The foyer of the theatre became the infamous site of an argument in 1897 between up and coming actor Richard Archer Prince and star-of-the-show Ellaline Terriss's father, actor William Terriss. Soon after that argument, the deranged Prince stabbed William Terriss to death at the stage door of the Adelphi Theatre nearby.

The current building opened in 1926, changing the shape of the auditorium from a horseshoe shape to the current rectangle shape, and the capacity is now 690 seats.

Rare thunder drum and lightning sheets, together with other early stage mechanisms, survive in the theatre.

Today the Vaudeville theatre is a grade II listed building and now owned by Max Weitzenhofer who acquired it from Stephen Waley-Cohen in 2002.

Matinee With A Difference», 0.1km