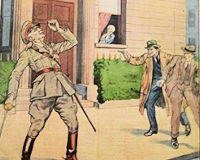 Description: Sir Henry Wilson was a senior British Army officer during the First World War and was briefly an Irish unionist politician.

He was in full uniform after returning from the unveiling of the Great Eastern Railway War Memorial at Liverpool Street Station at 1pm. Dunne and O'Sullivan were convicted of murder and hanged on 10 August 1922.