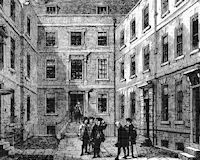 This is where Edmund Halley watched his first predicted eclipse.

Description: From 1710 to 1780 the building at the end of Crane Court was home to the Royal Society, the oldest scholarly association still in existence. It was Sir Issac Newtons idea to buy a dilapidated house here from famous developer Nicholas Barbon.

Although the Society moved out in 1780 to take up larger accommodation at Somerset House, this was the scientific centre of London in the mid 18th century.

There was a meeting hall for Society members, a Wren-designed repository room, library, garden and coach house to entertain scientific legends such as Newton, Sloane, Franklin and Joseph Banks

On the 3rd of May 1715, a rare solar eclipse occurred over England, predicted by Edmund Halley. He observed the eclipse right here on the Royal Societys building when the morning was perfectly serene azure blue. Halley published the first eclipse map shortly before the event. He predicted the next eclipse decades later but was long gone by then.

A lamp once presided over the Fleet Street entrance signalling that a meeting of the Society was in progress. Note today that there is an orb-like lamp above the pedestrian tunnel in a nod to its history.

The Man who knew everything», 1.7km