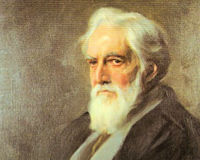 Description: Leading Egyptologist Sir William Matthew Flinders Petrie (1853-1942) was born in London but lived here for most of his married life.

Petrie was the first chair of Egyptology in the United Kingdom excavating many of the most important archaeological sites in Egypt in conjunction with his wife, Hilda Petrie.

Petrie developed the system of dating layers based on pottery and ceramic findings, and is a pioneer of the systematic methodology in archaeology and preservation of artefacts.

In 1913 Petrie sold his large collection of Egyptian antiquities to University College, London - now the Petrie Museum of Egyptian Archaeology.

His most famous discovery to be that of the Merneptah Stele - the first mention of the word Israel in any Egyptian text.

Petrie was a prodigious mathematician and his sense of precision was exceptional, at 19 he measured Stonehenge with 100 per cent accuracy. He amazed his colleagues by drawing his findings in the field with a pencil in both hands at the same time. He was quite the eccentric, often diggind on location in the nude and then dressing formally for lunch in his tent.

One of his trainees, Howard Carter, went on to discover the tomb of Tutankhamun in 1922.

Petrie died in Jerusalem on the 28th July 1942 and his body was interred in the Protestant Cemetery on Mount Zion. However, he donated his head to the Royal College of Surgeons in London, and it was delayed in transit due to the war. Sometime after, its label fell off and no one knew whose head it was for years. It was eventually identified, and is now stored, but not displayed, at the Royal College of Surgeons.

The Man who knew everything», 3.1km