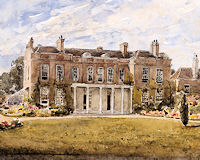 The house where Joseph Lister was born.

Description: This block of housing opposite West Ham Park is where Upton House, birthplace of surgeon Joseph Lister in 1827, used to be.