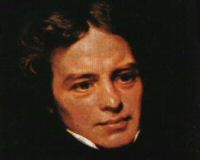 It was here that Michael Faraday, Man of Science, was apprentice

Description: In an era that was built on imagination, one of England's greatest scientists was himself discovered on the Estate; Michael Faraday (1791-1867) was apprenticed here at 48 Blandford Street at the age of 13.

In 1804, at the age of 13 and after a year's trial, Michael was apprenticed to Mr. Riebau, a bookbinder and stationer, who kept a shop in Blandford Street, Manchester Square. Michael's conduct had been so exemplary that he was taken without a fee.

He later had the good fortune to be employed as laboratory assistant by Humphry Davy, at the Royal Institution, eventually succeeding him as director in 1827.

Michael was fascinated by electrical phenomena and conducted many experiments with electricity and magnets, leading to the discovery that a current could be produced by a change in magnetic intensity. In 1831 he published his 'laws of electromagnetic induction'. He also discovered the laws of electrolysis.

Among Michael's many achievements were constructing the first electric transformer, isolating the compound benzene and discovering diamagnetism.