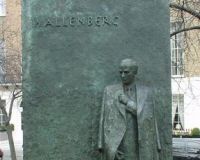 Statue of Raoul Wallenberg, the diplomat who saved Jews in WW2.

Description: Here, outside the Swedish embassy is a statue of Raoul Gustav Wallenberg, a Swedish diplomat who saved thousands of Hungarian Jews in World War 2.

He was arrestd by the Soviet Army as they entered Budapest in 1945 and taken to Moscow where he died in custody.

An Argument about a Brown Dog», 2.8km