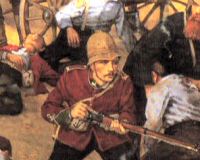 He was 22 years old, and a Private in the 2nd Battalion, 24th Regiment of Foot (later The South Wales Borderers), British Army during the Zulu War when the following deed took place for which he was awarded the Victoria Cross.

On 22 and 23 January 1879 at Rorke's Drift, Natal, South Africa, Private Hitch and another man (William Wilson Allen) kept communication with the hospital open, despite being severely wounded. Their determined conduct enabled the patients to be withdrawn from the hospital, and when incapacitated by their wounds from fighting, they continued, as soon as their wounds were dressed, to serve out ammunition to their comrades during the night.