Scene of the Flying Man! 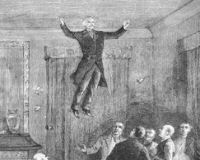 Description: This is where in the presence of Lord Viscount Adare, and where upon the visit of the Victorian Spiritualist Medium DD Home on December 16, 1868 that the medium floated out the Viscounts window on the 3rd floor and back in via another window.

It was one of Home's most legendary events, during a sÃ©ance at the rooms of Mr. S.C. Hall, Home demonstrated his abilities before a crowd of people. Lord Linksay recorded the event:

I was sitting on December 16, 1868, Lord Adare's rooms in Asley Place, London, S.W., with Mr. Home and Lord Adare and cousin of his. During the sitting, Mr. Home went into a trance, and in that state was carried out of the window in the room next to where we were, and was brought in at our window. The distance between the windows was about seven feet six inches, and there was not the slightest foothold between them, nor was there more than a 12 in projection to each window, which served as a ledge to put flowers on. We heard the window in the next room lifted up, and almost immediately after we saw Home floating in the air outside our window. The moon was shinning full into the room; my back was to the light, and I saw the shadow on the wall of the windowsill, and Home's feet about six inches above it. He remained in this position for a few seconds, then raised the window and glided into the room feet foremost and sat down. Lord Adare then went into the next room to look at the window from which he had been carried. It was raised about 18 inches, and he expressed his wonder how Mr. Home had been taken through so narrow an aperture. Home said (still in a trance) I will show you, and then with his back to the window he leaned back and was shot out of the aperture head first, with the body rigid, and then returned quite quietly. The window is about 70 feet from the ground.