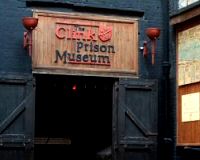 This is where The infamous Clink once stood, notorious prison.

Description: The Clink (1151 - 1780) on Southwarks Bankside was a tortuous place - it is thought it got its name from the clinking of the manacles, fetters, chains and bolts that were used there. It was the ultimate London prison and gave rise to the phrase in the clink. The jail was run by the Bishops of Winchester and was particularly nasty. Debtors, thieves, heretics and other ne-er do wells were treated appallingly by their jailers and brutality was a part of life.

Beatings and kickings were common, irons and fetters were fitted to prevent sleeping or cause paralysis, and prisoners were forced to stand in water until their feet rotted. Murder and fighting were not unusual. Authorised torture included the rack, breaking on the wheel, or crushing under very heavy weights. A ducking stool on the bank outside the Clink was used for punishing scolds, erring ale sellers, and bakers who sold underweight or bad bread.

When Mary I came to the throne n 1530, The Clink was used to incarcerate Protestants and when Elizabeth took over, she continued to use the prison for religious persecution although this time it was the Catholics and Protestant Puritans who were on the receiving end. By the middle of the 1600s The Clink was a debtors prison only and it was gradually used less and less because of the cost of upkeep.

It was burnt down in 1780 by rioters, and was never rebuilt.

There is a little museum on part of the site of where the old Clink once stood.

Home of the Tichborne Claimant», 4.0km

The Siege of Sidney Street», 1.6km