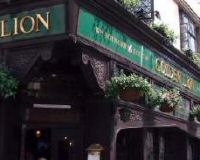 This is where serial killer Dennis Nilson picked up his victims.

Description: At the end of Romilly Street, just before the corner with Dean Street, is a pub called the Golden Lion, and there's been a Golden Lion here on Dean Street for over 250 years, this current one dates from 1875.

This one is notorious for being the pub where the serial killer Dennis Nilson picked up several of his rent boy victims. He was found guilty of murder in 1983.