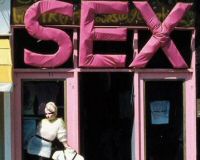 This is where Malcolm McLaren and Vivienne Westwood had SEX.

This store became very famous in the punk scene and produced such famous clothes as the Cambridge Rapist T-shirts, the shirt featuring cowboys drawn by Tom of Finland, Destroy shirts, venus shirts, tits shirts, fetish wear and others.

Famously, it was also here that the Sex Pistols auditioned Johnny Rotten.