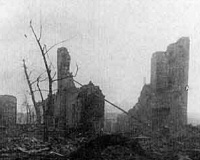 This is where Britain's biggest ever explosion occured in 1917.

Description: On Friday the 19th of January, 1917 at 6:52 pm a huge explosion ripped a large area of Silvertown from the face of the Earth.

The sound was heard and the shock-wave felt all over London and Essex, it was heard over 100 miles away as far as Southampton and Norwich, the fires that followed were seen 30 miles away from as far as Guildford and Maidstone.

In the crowded suburbs of Silvertown at least 73 people died and over 400 were injured. Up to 70,000 properties were damaged with over 500 destroyed.

The blast was heard up to 100 miles away and is cited in physics textbooks to illustrate the manner in which sound is transmitted.

1» I am following up my mothers autobiography, in which she describes how she was blown across the street by the explosion. Her little sister got left behind, but her Mum hit my Mum for letting go of her sisters hand. They were living in a shop in the East End at the time. All the windows got blown out along their street. She was very scared when she saw the strange light in the sky. (Angela Diamond)
Posted by Angela Diamond on 2008-01-18