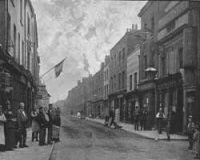 The notorious Ratcliff murders started with the Marr family here

Description: This is where in 1811 the Ratcliff murders started and caused the first national media furore because they took place in the victims home.

They took place here just behind a shop here on The Highway (once called Ratcliff Highway).

The victims were Timothy Marr, a 24-year-old linen draper and hosier, who had served the East India Company on the 'Dover Castle' from 1808 to 1811, his wife Celia and their 3-month-old son Timothy, and James Gowan, a shop boy.

In 1811, two of the world's first police forces were in London. One was the City-based Bow Street Runners, whose remit did not include investigation of this crime. The other was the River Police, founded in 1798 to tackle the thefts from ships anchored in the Pool of London and around Wapping.

And vengeance was exacted when the then Home Secretary allowed the body of killer John Williams, (who committed suicide by hanging himself the night before he was arrested) to be paraded through the East End streets.

Williams was then buried with a stake through his heart at the junction of Commercial Rd and Cannon Street Rd. Itâs a story that has inspired at least two books, The Maul and the Pear Tree by P D James and T A Critchley, and the mystical Dan Leno and the Limehouse Golem by Peter Ackroyd.