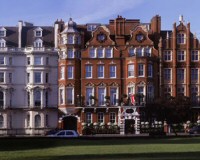 The 5 star hotel that was once a private lunatic asylum.

Description: The Milestone Hotel and Apartments takes its name from the old cast iron milestone, which stands in its original position within the hotel's boundary.

The original dwelling on this site, Kensington House, built around 1689, was occupied by Foot Onslow, a Commissioner of Excise under William III. His son, Arthur Onslow (1691-1768) was a speaker of the House of Commons for thirty years and he sublet the property to George Davenport, an office in the Royal Bodyguard; George boasted himself to be the grandson of William Shakespeare - although this is unproven.

From George Davenport, Kensington House passed onto Lady Susan Belasye who in her youth had been a mistress of James II. For a few years in the mid 18th century, it was occupied by Count Peter Grigorevich Chernyshev, the Russian Ambassador in London, whose daughter Natalia lived to the age of ninety-six and achieved immortality as the prototype
for the Countess in Pushkin's Queen of Spades.

Prince Charles Victor de Broglio ran a Jesuit school on this site which numbered among the future King Louis Philippe as one of its ushers.

From 1830, Kensington House was occupied as a private lunatic asylum and was replaced by a second mansion also called Kensington House which was constructed by the dubious company promoter, Baron Albert Grant, the founder of Leicester
Square (his shareholders had invested Â£24 million in his projects and never saw the majority of their investments). Grant's white elephant was replaced in the 1880's by the two houses we see today.

The first house, no. 1 Kensington Court, was erected between 1883-1884 to designs by JJ Stevenson and constructed by Holland and Hannen. Among its more interesting occupants was the diplomat and author, the first Baron Redesdale
(1837-1916), the grandfather of the famous Mitford sisters. His former home passed into hotel use around 1922. It was later joined by no. 2 Kensington Court in 1925, also constructed between 1883-1884 to designs by TG Jackson.

In August 1986, the Milestone was badly damaged in a fire. The resulting blaze took three hours to bring under control and the reason for the fire still remains a mystery.