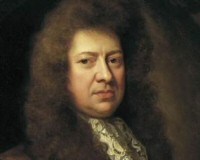 Samuel Pepys lived here and his ghost is said to haunt here.

Description: Samuel Pepys (1633-1703), diarist and secretary of the Admiralty, lived here 1679-1688 to live with his friend and former secretary William Hewer and lived there until 1688, when he moved next door to number 14 and where he lived until 1701, when he retired to Clapham.

Pepys' blurred, smiling phantom was reported near the staircase of the building several times in 1953.

There is a plaque outside, affixed in 1947. Oddly, there is also a rather similar plaque on the house next door too.