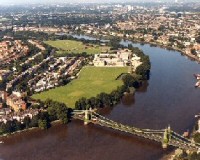 This is where the first Joseph was commissioned and performed.

Description: Joseph and the Amazing Technicolor Dreamcoat, by Andrew Lloyd Webber and Tim Rice, was originally commissioned for and performed by the boys (both orchestra and singers) of Colet Court.

The first performance in its original form as a 15-minute pop cantata took place in the Old Assembly Hall of Colet Court in Hammersmith on 1 March 1968.

The second performance, also involving Colet Court boys, was on 12 May 1968 at Central Hall, Westminster. This was picked up by a reviewer for the Sunday Times. The third performance, of a now expanded version, was at St Paul's Cathedral on 9 November 1968. The first recording was released in 1969, and remained in the US charts for three months, since when the piece has been performed commercially all over the world and re-recorded on disc and on video. It has been performed again at Colet Court as the annual school play several times, most recently in 2004, directed by the Head of Drama, Bridget Gordon.

Bob Forrest-Webb and Peter Gritton, Assistant Director of Music at St Paul's School have since written a musical called Jones, which was first performed at the school in November 2006, directed by the then headmaster, Geoff Thompson. It was thought that it would be a great success like Colet Court's previous musical success Joseph. Only time will tell. Sina lari,A Coletine and Organist, acted in this play and is a current pupil of colet court

Colet Court was founded in 1881 by Samuel Bewsher, who was an Assistant Master at St Paul's, as well as being the High Master's secretary. The preparatory school was initially housed in Edith Road, but the rapid growth of the school soon resulted in a new building being erected near the St Paul's playground in West Kensington. This new building was ready for occupation in September 1883 and was known as Colet House. In 1883, James Bewsher, Samuel's brother, became the first Headmaster. The school continued to grow rapidly and a new site and buildings were soon found and a new school block in Hammersmith Road was completed in 1890. In 1891 the school changed it's name from Colet House to Colet Court. In ten years the school had grown from six pupils to more than three hundred.