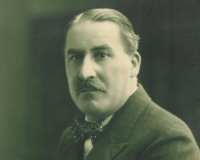 This is where Howard Carter, Egyptian Archaeologist was born.

Description: From 1869 to 1891, the house that stood here before Richmond Mansions was owned by the artist Samuel John Carter. His wife gave birth to Howard Carter, later to become world famous as discoverer of the tomb of Tutankhamen.

He was born and brought up at what was 10 Rich Terrace, now the site of Richmond Mansions.

In 1891, at the age of 17, Howard Carter went to Alexandria, Egypt to work for the Egyptian Exploration Fund as a tracer.