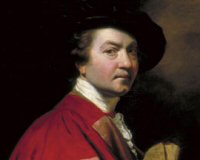 This is where one of the most famous literary clubs met.

Description: This is where The Literary Club, at what used to be the Turks Head Tavern. The Literary Club was founded by Joshua Reynolds and Samuel Johnson in 1764 and was probably the most famous of the literary and theatrical clubs in London.

Members include Oliver Goldsmith and Edmund Burke. The Club met on Monday evenings at 7.00 - the only matter of conversation excluded being politics. Similar clubs and societies had appeared since the early 1700s - many of those outside London had rather more of an overt educational agenda.

It was known simply as the Club (though members and others often called it the Literary Club), met once a week for supper and conversation until late in the night at the Turk's Head tavern, kept by one Charles Swinden.

John Hawkins resigned from the Club before February 1768, having been ostracized because he abused Burke.

By 1784 the Club included seven peers, three bishops, and a dean, and men of affairs for the first time outnumbered men of letters. A resolution on 9 May 1780 in favour of the latest increase also stipulated that membership should not exceed forty.

By November 1783 the landlord of the Turk's Head and his widow who had kept on the tavern were dead and the house had reverted to private use, so the Club moved to Prince's, in Sackville Street.