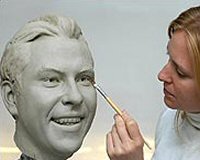 This is where Mrs Salmon's Waxwork shop used to be.

Description: This was the location of the office of the Duchy of Cornwall, in the reign of James I. It is just possible that it was the house originally built by Sir Amyas Paulet, at Wolsey's command, in resentment for Sir Amyas having set Wolsey, when a mere parish priest, in the stocks for a brawl.

Wolsey, at the time of the ignominious punishment, was schoolmaster to the children of the Marquis of Dorset. Paulet was confined to this house for five or six years, to appease the proud cardinal, who lived in Chancery Lane. Sir Amyas rebuilt his prison, covering the front with badges of the cardinal.

Afterwards it became Nando's, a famous coffee-house, where Thurlow picked up his first great brief. One night Thurlow, arguing here keenly about the celebrated Douglas case, was heard by some lawyers with delight, and the next day, to his astonishment, was appointed junior counsel. This cause won him a silk gown, and so his fortune was made by that one lucky night at Nando's.

In 1795 it became the place where Mrs. Salmon (the original Madame Tussaud) exhibited her waxwork kings and queens, after moving from Fleet Street. There was a figure on crutches at the door; and Old Mother Shipton, the witch, kicked the astonished visitor as he left. Mrs. Salmon died in 1812. The exhibition was then sold for 500, and removed to Water Lane.

It included a waxwork of former neighbour Sweeney Todd, the demon Barber of Fleet Street. The wax effigy featured Mr. Todd and his famous original chair.

An advertisement of Mrs. Salmon's wax-works in Tatler dated Nov. 30, 1710, specifies among other attractions the Turkish Seraglio in wax-work, the Fatal Sisters that spin, reel, and cut the thread of man's life, 'an Old Woman flying from Time, who shakes his head and hour-glass with sorrow at seeing age so unwilling to die. Nothing but life can exceed the motions of the heads, hands, eyes, etc. of these figures'

A Market With Mexican Roots», 3.9km