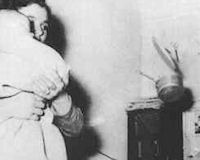 This is where the South Kensington poltergeist claim happened.

Description: On August 18th 1907 the London Weekly Dispatch reported on disturbances in the stationary shop here.

The owner at the time Arthur Herbert George and his assistant, a boy, or a young man, aged 17, saw books and piles of stationary slide unaccountably from shelves. Everything that they had replaced fell again, so that they could make no progress, trying to restore order. No vibration, no force of any kind, was felt. Two electric lamps in the window toppled over.

Then there was livelier action: packages of note paper flew around, striking George and his assistant several times. George shut the door, so that customers should not come in and be injured. The next day boxes of stationary and bottles of ink were flying around, and four persons were struck.

To this statement was appended an affidavit by an antique dealer, Sidney Guy Adams, of 23 Bute Street, testifying that he had seen heavy packages of note paper flying around, and that he had been struck by one of them.

In the Weekly Dispatch of September 1st, it was said that there had been a repetition of the disturbances, upon the same days of the week (Wednesday, Thursday, and Friday) as the days of former phenomena. The damage to goods amounted to about 10.

The Children of Capland Street», 3.0km