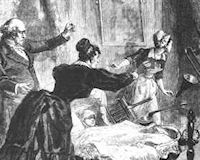 This is where one of the best poltergeist stories occurred.

Description: On the first of January, 1921, the owner of this house, a Mr. TS Frost, bought a load of coal for the winter. In his home were three children, Gordon, Bertie, and Muriel.

In the grates of his house, the coal exploded, and coal in buckets exploded too. A policeman was called in.

He made his report upon coal that not only exploded, but hopped out of grates, and sauntered along floors, so remarkable that an Inspector of Police investigated.

According to a newspaper, it was this Inspector's statement that he had picked up a piece of coal, which had broken into three parts, and had then vanished from his hands.

It was said that burning coals leaped from grates, and fell in showers in other rooms, having passed through walls, without leaving signs of this passage. Flat irons, coal buckets, other objects danced. Ornaments were dislodged, but fell to the floor, without breaking. A pot on a tripod swung, though nobody was near it.

Charles Fort said There has been no poltergeist case better investigated. I know of no denial of the phenomena by any investigator. One of the witnesses was the Rev. A.L. Gardiner, vicar of St. Gabriel's, Wood Green, London. There can be no doubt of the phenomena. I have seen them, myself. Another witness was Dr. Herbert Lemerle, of Hornsey. Dr. Lemerle told of a clock that mysteriously vanished. Upon the 8th of May, a public meeting was held in Hornsey, to discuss the phenomena.

In the newspapers there was a tendency to explain it all as mischief by the children of this household. The child, Muriel, terrified by the doings, died on April 1st. The boy, Gordon, frightened into a nervous breakdown, was taken to Lewisham Hospital.

The Children of Capland Street», 4.8km