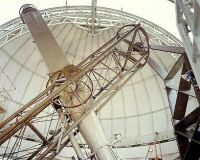 One of the most important scientific sites in the world.

Description: The Royal Observatory was founded in 1675 by Charles II and is today one of the most important scientific sites in the world, being home to the Prime Meridian of the world and Greenwich Mean Time (GMT).

In March of 1675 John Flamsteed was appointed the first Astronomer Royal of the Royal Observatory and was given the task of finding longitude and thereby improving navigation at sea - a discovery that would lead to the lives of many seaman and sailors being saved.

The main building of the Royal Observatory is Flamsteed House, which was designed by Sir Christopher Wren and houses the elegant Octagon Room. Other buildings at the Royal Observatory include a dome housing a 28 inch refracting telescope - the largest of its kind in the UK- and London's only public camera obscura.

In 1960, shortly after the transfer of the Royal Greenwich Observatory (RGO) to Herstmonceux (and later Cambridge), Flamsteed House was transferred to the National Maritime Museum's care and over the next seven years the remaining buildings on the site were also transferred and restored for Museum use. Here the collections of scientific, especially astronomical, instruments has continued to grow. Following the closure of the RGO at Cambridge in October 1998, the site is now again known as the Royal Observatory, Greenwich.